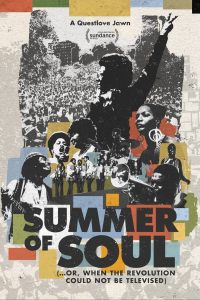 This scripture verse from my favorite book in the Bible is appropriate for my latest blog post. The book of Ecclesiastes is the most understood chapter in the Bible and the one I have connected with the most throughout my adult life.

I found out a few days ago that in 1969 there was another music festival in Harlem that was just important to American Pop Culture as Woodstock. The Harlem Cultural Festival happened just before Woodstock. However, there was never anything released to the public until now.  Questlove from the group The Roots created his first film about this festival. I’m so glad he did.

1969 was a year of civil unrest.  Martin Luther King, Malcolm X, & Robert Kennedy had already passed away. It seemed the country was ready to explode with violence. The Harlem Cultural Festival helped in channeling black folks anger into how art can be balm in turbulent times.

I appreciate Questlove bringing the Harlem Cultural Festival to the small screen and showcasing another part of American history that I did not about until I watched this documentary. I recommend Summer of Soul for music nerds like myself and documentary fans as well.