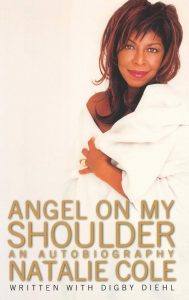 “As you walk your own journey, keep your eyes open, listen well, and if you look real hard, you just might find an angel on your shoulder.”

Those words are from the last paragraph of the late Natalie Cole’s autobiography, Angel On My Shoulder published November 2000, fifteen years before her death in December 2015.  I do not read many celebrity autobiographies, but I have started research on my next novel and I read about one of my favorite singers.

For American R&B female singers, Natalie Cole does not get mentioned in the same vein as Aretha Franklin, Patti LaBelle, Gladys Knight, Whitney Houston, Anita Baker, or Mariah Carey. However, she deserves to be mentioned in the same conversation with those names.  Cole shares her life story growing up as the daughter of the great Nat King Cole.

Natalie shared her reluctance on becoming a singer, especially in the shadow of her father. She graduated from the University of Massachusetts with a degree in child psychology and had plans to pursue it as a career. She described her workman-like rise to stardom in the late 1970s, leading to her downfall with drugs. Natalie discussed her failed marriages and fractured mother-daughter relationship. Also, when she finally embraced her father’s legacy and recorded Unforgettable…With Love, Cole’s magnum opus. She always believed an angel was with her every step of the way on her tumultuous journey as a singer.

Most readers of celebrity biographies want to read them for the salacious stuff. There is plenty of that material in Cole’s autobiography.  However, these words from earlier section in the book describe how Natalie feels about her role as a singer:

Natalie provided gems like that throughout the book and I connected more with an artist’s creative process than their personal life.  I’m glad that Angel On My Shoulder had those kinds of musical insights that give the book a look beyond her dealing with being a famous musician.

I have been listening to her first four albums (Inseparable, Natalie, Unpredictable, & Thankful) along with Unforgettable since reading the autobiography.  Cole’s tone and versatility make her unique as a singer and songwriter.  Songs like Inseparable and I Can’t Say No sounds like the best of Aretha’s work. Songs like Something For Nothing and Sophisticated Lady(She’s A Different Lady) conjures up the best of 1970s funk.  And a song like Annie Mae shows off Cole’s songwriting chops and her ability to tell a story. Her biggest songs like This Will Be (An Everlasting Love) & Our Love have left an indelible mark on pop and R&B.  Natalie Cole was a true singing talent and I hope music aficionados and historians take a closer look at her oeuvre.

I’m glad that I read Angel On My Shoulder and Natalie Cole was a shining star that has earned her place in contemporary American music.   Rest in Love, Natalie!