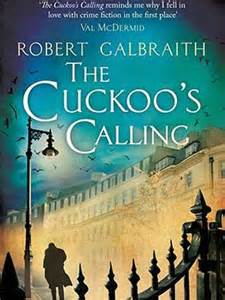 I had made it a personal policy to not read and review for this blog the hottest or most publicized novel of the year.  However, I did almost break my policy last year with Gone Girl by Gillian Flynn.  But, I decided against it.

Well, my resistance has finally dropped with The Cuckoo’s Calling by Robert Galbraith AKA J.K. Rowling. I must admit the pseudonym controversy got me intrigued and I knew I had to read and review this novel.

The Cuckoo’s Calling tells the story about the death of Lula Landry, one of England’s most famous supermodels.  She fell from her high-rise loft in London and the police have ruled the death as a suicide. However, John Bristow, the deceased’s brother refuses to believe it was a suicide and hires private investigator Cormoran Strike to investigate the supermodel’s death.

Strike is a hard-livin’ detective who is on the brink of financial and personal ruin when Bristow arrives at his office to see if he will take on his dead sister’s case. The private investigator agrees to Bristow’s request and enters the world of high fashion, fame, and how wealthy Londoners really live.  Also, he is the son of a famous singer and because of that connection gets him entrance into this world without much resistance.

Rowling creates various twists in the plot in order to keep the reader guessing if the supermodel’s murder was really a suicide. The strength of the novel was her descriptive narrative and keen observation of human behavior.  Here’s an example:

“Her antipathy towards Strike seemed to have evaporated. He was not surprised; he had met the phenomenon many times. People liked to talk; there were very few exceptions; the question was how you made them do it. Some, and Ursula was evidently one of them, were amenable to alcohol; others liked a spotlight; and then there were those who merely needed proximity to another conscious human being.”

That passage was early in the novel and it showed Rowling’s strengths of the aforementioned traits that made The Cuckoo’s Calling an excellent  read. But, I must admit there is not a lot of action in the story.  It made me think if Rowling was writing this novel as a tip of the cap to P.D. James.  I could see James writing a novel like this one as well.

I came to reading The Cuckoo’s Calling as someone who had never read the Harry Potter books or her first adult novel, Casual Vacancy.  I had read one of the reasons Rowling wanted to write under a pseudonym was that her work could be judged on the basis if it is good or not.  And not to be judged through the lens as a celebrity novelist.

Well, if this was a first novel by Robert Galbraith…..it would be an outstanding first novel.  But it is Rowling’s second adult novel and deserves to be judged on its own merits as a crime fiction novel.

The Cuckoo’s Calling is one of my favorite reads of 2013 and Rowling is an engrossing, powerful storyteller.  It was worth breaking my personal policy.