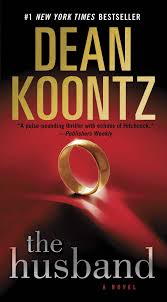 “I would have love to read that book with you, babe.”

My wife made that comment after a recent conversation about books.  I told her I had read Stephen King’s Bag of Bones recently and her interest in that book surprised me.  She was more of the movie watcher than book reader in our family.

Since she is a fitness aficionado, I decided to create a husband/wife challenge around our interests.  For the month of October, I would exercise and go to the gym with her if she would read one novel with me. She agreed to the challenge and The Husband by Dean Koontz was chosen as the novel we would read together.

The Husband is the story about Mitch Rafferty, a self-employed gardener, whose wife has been kidnapped and the ransom for her return is two million dollars and he has sixty hours in order to come up with the cash.  Mitch loves his wife, Holly, more than anything in this fictional world but Koontz asks a basic question in this story, how far will you go for love?

While, the plot is simple but a writer of Koontz’s skill creates several surprising twists and turns on the way to its resolution.  Also, he deals with family relations and asks another question in this novel, how well do you really know someone that came from the same parents as you do?

I know some of the more perceptive types might think they have already figured out the basic plot from those last two paragraphs.  So I will not go into any more detail about the story.  However, I can assure you it is not quite what you are thinking on who the kidnapper was in relation to Mitch and Holly.  Moreover, I will never the view the state of New Mexico in the same way after reading this novel.  (I lived in both Albuquerque and Santa Fe for a total of nine years.)

I must admit that The Husband was not my favorite Dean Koontz novel.  I’ve read at least a dozen of his books and I would rank it in the middle of the pack.  (I would consider Cold Fire, Strangers, Watchers, and the Odd Thomas series as the best Koontz novels.)  But it was a solid page-turning story and good entertainment.

In closing, my wife liked the novel and it created some good discussion about the characters and plot.  I always thought reading could bring a couple closer together and maybe I should have tried this challenge a long time ago.  I know, we men always think of things much later than our wives would have.  🙂

A little over a decade ago, I went on a Dean Koontz reading binge.  I read at least ten or eleven of his novels and I couldn’t get enough of them at that time.  However, my reading tastes has changed quite a bit over the years and I really didn’t have a desire to go… END_OF_DOCUMENT_TOKEN_TO_BE_REPLACED