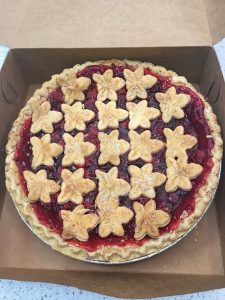 It’s no secret for those that know me well, Cherry Pie is my favorite dessert. I have a sweet tooth for sure.  I enjoy cookies, rum and pound cakes, and Sweet Potato and Apple pies.  But, none of those other desserts hold a candle to my beloved Cherry Pie.

Why Cherry Pie?  I have thought about this over the years and don’t really have a great explanation.  I know that I’m a texture eater.  If the texture is not right, then I will not eat it.  Somehow, the tart cherries embedded in the pie crust (graham cracker crust specifically) has the right texture that ignite my tastebuds and tell my brain…that it’s awesome!

The cherry pie pictured above was given to me by a co-worker at the day job here in San Antonio.  This co-worker found out about my love of cherry pie and surprised me when they brought it to work a couple of weeks ago.  It made me day. I have learned that people do pay attention to your food idiosyncrasies.  This pie was from Naeglin’s Bakery in New Braunfels, Texas.  Naeglin’s Bakery has been in existence since 1868 and has the claim to be the oldest bakery in Texas.

Here are some fun facts about Cherry Pie:

Cherry Pie is also eaten during the 4th of July celebration in America and July 1st for Canada Day.  This pie has a long history behind it and a favorite for a lot of people.

I’m grateful to having a wife make a Cherry Pie for my birthday each August and often during Christmas. I get to eat Cherry Pie at least once a year and sometimes twice or three times.  That’s my story about Cherry Pie and why it’s my favorite dessert.

I will end this blog post when Sade’s song, Cherry Pie.  Actually, it really does not have anything to do with the pie.  But, I appreciate the song’s title and Sade is one of my favorite singers.  Ciao!