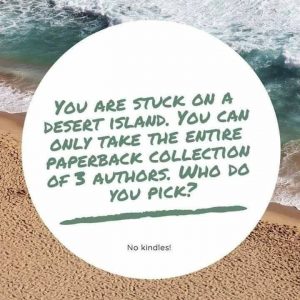 I saw this post on my Facebook page by the local library three days ago.  I have been thinking about how to answer the question since it posted.  I provided a comment soon after they posted on Facebook.  It was an interesting question and considering what we are dealing with in the COVID19 pandemic a relevant one.

I have thought about this one long and hard.  I chose Jorge Amado, Charles de Lint, and Ralph Ellison as my three choices. I wished I had six choices because I would have included Octavia Butler, Guy Gavriel Kay, and Haruki Murakami as my next three authors to read all of their works if I was stuck on a desert island.  It was that close between my first three and second choices.

Here is the reason for my first three choices.  I consider Jorge Amado as one of Brazil’s greatest writers.  I got introduced to Amado’s work back in the mid-1990’s when I lived in Santa Fe, New Mexico.  I read Dona Flor and Her Two Husbands and enjoyed it.  That led me to read Home Is the Sailor, Gabriela, Clove, and Cinnamon, Tieta, Tent of Miracles, and War of the Saints.  Amado brought me into Brazilian culture (especially Afro-Brazilian) that I would have never known about outside of reading his novels.  He does not get mentioned in America as much regarding Latin American magical realist writers.  But, I believe he is one of the world’s great storytellers and his novels have opened my world up a little wider having read his books.

Charles de Lint is my favorite living fantasy writer. De Lint brought the fantasy world building to a fictional Canadian city of Newford (modeled after Ottawa, Ontario) and added a contemporary spin to the genre. Also, de Lint emphasized a multicultural perspective that was needed in the fantasy genre long before it became fashionable to do so. My favorite de Lint books are The Little Country, Memory & Dream, Trader, and Dreams Underfoot, the first short story collection.  If you are a fantasy reader, then I will highly recommend to you read de Lint’s work.

Ralph Ellison wrote one of the most important novels I have ever read in Invisible Man. He did not have a lot of books published but I have always wanted to his essay collections, Shadow and Act, and Going to the Territory, and his posthumously novel, Juneteenth. Ellison spoke directly to racism in America and his elegance would be something I want to read while stuck on a desert island.

Those are my three authors that I would want to read if I was stuck on a desert island.  Please share your three authors in the comments and I’m grateful that my local library ask this question.