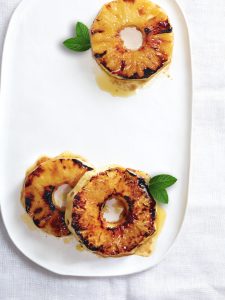 My daughter, Norah, used to ask me on a semi-regular basis what is my favorite fruit? I would tell her pineapple every time she asked.  I don’t know if she wanted to me to give a different answer.  Or she wanted me to reconfirm my love for this wonderful, delicious fruit.

I lived in Albuquerque, New Mexico in late 1990s for five years and a restaurant near downtown named Tucanos Brazilian Grill sold glazed pineapple on a skewer.  I would go to Tucanos just to have their glazed pineapple. So good. So sweet.  So delicious.

Here are some fun facts about pineapple:

There are many facts about pineapple and it’s a favorite for many people around the world.  I’m looking forward to having some glazed pineapple soon!