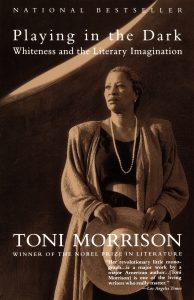 As a reader (and storyteller), it’s imperative that one reads both realistic and imaginative fiction to get the broadest view possible in regard to storytelling.  I just learned about Toni Morrison’s work of literary criticism titled Playing In The Dark from a Goodreads friend recommendation.  Even though this book was published in 1992, I had not heard of this well-received work. Morrison presents an argument on how black characters have been imagined through stories like Sapphira and the Slave Girl by Willa Cather, The Narrative of Arthur Golden Pym by Edgar Allan Poe, Huckleberry Finn by Mark Twain, Garden of Eden and To Have and Have Not by Ernest Hemingway.

Morrison boils her argument down to how these writers have viewed black people in their works as the dark other through a projection that does not show the full range of their humanity.  For example, she describes how the two main characters in Sapphira and the Slave Girl this way:

Sapphira Colbert, an invalid confined to her chair and dependent on slaves for the most intimate services, has persuaded herself that her husband is having or aching to have a liaison with Nancy, the pubescent daughter of her most devoted female slave. It is clear from the beginning that Mistress Colbert is in error: Nancy is pure to the point of vapidity; Master Colbert is a man of modest habits, ambition, and imagination.

Sapphira’s suspicions, fed by her feverish imagination and by her leisure to have them, grow and luxuriate unbearably. She forms a plan. She will invite a malleable lecherous nephew, Martin, to visit and let his nature run its course: Nancy will be seduced. The purpose of arranging the rape of her young servant is to reclaim, for purposes not made clear, the full attentions of her husband.

I’m not a literature student or literary critic, but as a lay person reading an analysis like this one shows how powerful the imagination can be and with the mixture of race and sexuality is quite shocking and troublesome. Morrison continues with the aforementioned other examples of how American whiteness in literature defines blackness in a way that’s cruel and dehumanizing.  She does make it a point to explain that she is not projecting those characteristics to the authors themselves but to the characters they have created.

Playing in the Dark is definitely a book for literature students, literary critics, and academics. Morrison provides a subtle analysis how American realistic fiction has been shaped by its greatest authors.  It is a work that will make me more of an observant reader and continue to push that people of color tell our own stories as a counterbalance.