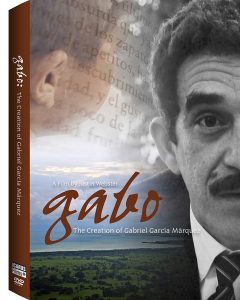 Gabo: The Creation of Gabriel Garcia Marquez is the second documentary about a writer I have watched in the past few days.  This 2015 documentary chronicles the author’s rise from a small Colombian town to becoming one of the world’s greatest and beloved writers.

We learn the genesis behind his greatest novels like One Hundred Years of Solitude, Love in the Time of Cholera, and Chronicle of a Death Foretold. Garcia Marquez begins his writing career as a journalist and that background laid the foundation for all of his works.  Also, the documentary covers his political affiliations especially with Cuban dictator Fidel Castro and former President Clinton. Garcia Marquez had a genuine and complicated friendship with Castro that troubled many Latin American intellectuals and scholars at the time.

Gabo’s greatest contribution to literature was bringing the magical realism genre into mainstream fiction.  Of course, he was not the first writer to exhibit those qualities in his fiction.  However, when One Hundred Years of Solitude was published by a small Argentinian publisher in 1967, the novel became an instant success and has sold over 45 million copies worldwide.  It is the second most translated work of fiction from Spanish after Don Quixote. The novel brought a new genre to the forefront of contemporary literature.

The documentary is in Spanish with English subtitles and about 90 minutes long.  It does a good job showing the successes, failures, friendships, and contradictions that made up Latin America’s greatest writer.  I will admit that I have only read those aforementioned novels and Love In the Time of Cholera is my favorite.  I was surprised to find that Garcia Marquez based the novel on his parents’ marriage and wanted to have a happy ending to be respected in literature.

For the world-renowned novelist Gabriel Garcia Marquez, most readers have read or attempted to read One Hundred Years of Solitude or the more accessible Love In The Time of Cholera. Some (like me) have read both novels. However, Garcia Marquez has a body of work that gets overlooked by those aforementioned books. I was in… END_OF_DOCUMENT_TOKEN_TO_BE_REPLACED