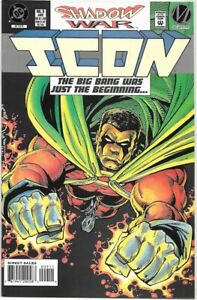 My goal is to re-read and review the entire forty-two issue run of Icon that was published by Milestone Media in conjunction with DC Comics from 1993-1997. I have read the first story arc of eight issues that set-up the origin of Icon and his teenage sidekick, Rocket.  Issue 9 begins a crossover series called Shadow Cabinet, and it was the first major crossover series from Milestone Media. Since I’m only reading and reviewing Icon, my review will feel incomplete to die hard comic book fans that have read the entire Shadow Cabinet crossover series.  My apologies upfront to you.  However, I’m only interested in Icon and Rocket and so my focus will remain there. Now, with that disclaimer out of the way, it’s time to discuss my thoughts about Issue 9.

Icon is still trying to find out what happened in the Big Bang, a major event that changed the city of Dakota. He goes to meet Mayor Jefferson to get further answers and is met by an android determined to stop him.  Meanwhile, Rocket is being recruited by a pyrotechnical villain named Holocaust as he wages war on a group called Shadow Cabinet that is trying to stop him.

Also, Rocket’s boyfriend tells her mother that he is the father of her upcoming child and offers money to pay for an abortion. And you can imagine that did not go over well and when Rocket finds out…..

Anyway, this issue is part of a larger narrative that introduces all the Milestone media characters to readers during the mid-1990s. I’m much more interested in Rocket’s pregnancy (will she keep the baby) and who is Icon, really? The storyline hints that Icon is not just a black version of Superman but a superhero on his own terms and does not fit neatly into the box that’s usually prescribed for black men.  That’s why I’m re-reading this comic book series and it reveals that good storytelling (whether it’s comic books, graphic novels, short stories, novellas, or novels) can come in various ways if you are open to it.  Onto issue #10.