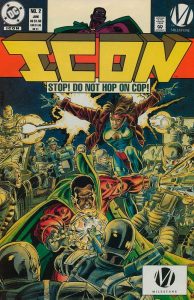 The Mayor of Dakota, Thomasina Jefferson, is being held hostage at city hall.  The police commissioner calls in S.H.R.E.D, the city’s most elite police unit.  They hold Icon and Rocket at gunpoint. Icon wants to comply with the police officers and Rocket reminds him of his social status despite being able to defeat the entire unit easily.

Icon learns a valuable lesson about the relationship between black people and the police.  He uses his power to handle the standoff with S.H.R.E.D.  Meanwhile, the mayor tries to convince her abductor to give himself up and make it a peaceful resolution.  The abductor reminds her about an incident where she ordered a raid on a nearby island.  Children were killed in that raid and the abductor wants to mayor to take responsibility for her actions. Icon finally makes it to where the mayor was being held and her abductor transforms into a monster.  It sets up issue three where Icon will have to deal with the monster.

McDuffie seems to be laying the groundwork on how Icon will be affected by citizens of Dakota that he has sworn to protect.  His conservative ideals will be tested not only by Rocket, but by the people of the city.  Will Icon become more of a bleeding heart liberal?  Or will he use his powers to help people and keep his distance from them?  That is a dynamic I’m looking forward to getting played out as I continue reading the series.  Also, I have to mention M.D. Bright’s excellent artwork fits the story.  Two issues into my re-read and I’m enjoying Icon all over again.