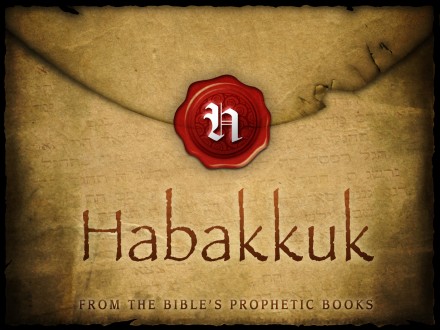 Let’s face it, many Christians when they open their bibles don’t go looking for the Book of Habakkuk for their reading, studying or devotion time. Shucks, I don’t think we can even pronounce his name correctly!

Even among serious biblical students and theologians, Habakkuk has been overlooked and ignored.  Here’s an example:

“When a well-worn Bible is allowed to fall open at random, the possibility of its opening at the Book of Psalms or the Gospel of John or one of the Epistles is good. Even among zealous Bible students, the books of Habakkuk and Zephaniah are seldom read. One is tempted with the thought if they were somehow surreptitiously removed from the Bible, they would not be missed.”  (from the preface, Everyman Bible Commentary: Habakkuk and Zephaniah by Cyril J. Barber)

My hope for this study is to show that Habakkuk is an important book of the Bible and an integral part of God’s story to us. Also, that it would be missed if it was suddenly removed from the Bible.

Habakkuk is the eighth book in the Twelve books of the Minor Prophets from the Old Testament. However, little is known about the prophet apart from this book. Scholars believe his prophecy can be dated around 609 B.C., which is at the end of King Josiah’s reign (640-609 BC) to the beginning of King Jehoiakim’s reign (609-598 BC). And to get the historical background of Habakkuk’s prophecy, I would suggest reading 2 Kings 22-23 and 2 Chronicles 34:1-36:4.

It’s been said that Habakkuk’s name in Hebrew means “to embrace” or “to wrestle with.” Well, if that’s true then after reading the aforementioned scriptures of 2 Kings and 2 Chronicles will give you a good idea of what the prophet was trying to embrace or actually wrestle with during that time.  Here’s a sample:

“The peace that had accompanied the reign of Josiah had allowed the people to enjoy a greater degree of prosperity than had been possible for many years. In a real sense they thought the new era would last indefinitely. The realities that faced them, however, could not have been anticipated by either the political liberals or the religiously-minded conservatives.

The power of Assyria had collapsed. Political supremacy belonged to Egypt. Strong political ties, however, had been established with the emerging kingdom of Bablyon. Because she was a vassal of Egypt and a friend of Babylon, it seemed as if nothing could threaten the progress of Judah’s prosperity.

The nation owed its prosperity to God’s favoring of one man, Josiah (2 Kings 22:1, 12-17). Josiah had led the nation in several notable reforms. Although those reforms touched only the outward observances of the people, God said He would honor Josiah for his faithfulness (2 Kings 22:18-20).

The leaders of the people ignored the spiritual reasons for their material prosperity and thought God’s favor could be enjoyed without interruption. It was not long before greed and avarice became prevalent. The rich exploited the poor. Justice favored the wealthy. Those who were God-fearing found themselves oppressed by an ever-increasing number whose desire for power led them to secure, by one means or another, those positions that met their personal (and often pathological) needs.

It was amid such conditions that God revealed His will to Habakkuk. Turbulent times lay ahead for the Lord’s people. The message Habakkuk was told to proclaim was one that would please neither the Left nor the Right. The delusions of the decision makers were to be dashed to pieces before the harsh reality of God’s sovereign justice.” (pp. 13-14, Everyman Bible Commentary, Habakkuk and Zephaniah by Cyril J. Barber)

It is interesting that writer mentioned politics several times in that previous passage. I know after this past presidential election, there are many Christians who are done with politics.  But, it’s unavoidable and whether in Habakkuk’s or our time, we have to deal with it and ultimately trust that God is in control no matter what happens politically.

I will confess this was the impetus for doing this study. The things I’ve heard and read after the election has shocked and saddened me. For political commentators like Glenn Beck saying “God really sucks right now” to States wanting to secede from the Union to some Christians proclaiming the rapture is finally coming since Barack Obama has been re-elected.

But, after reading Habakkuk has shown me that there’s truly nothing new under the sun and human nature doesn’t change.  And what happened over 2600 years ago during the prophet’s time is relevant to our time today.

The prophet asks the question to God that I believe most Christians and non-Christians would ask Him if they had the chance: If God is so good, why does he allow evil and injustice to happen?

I will assert this question not being answered satisfactorily is the biggest barrier from non-believers into becoming believers. On the surface and even logically, it doesn’t make sense that God who is all-knowing, all-powerful, and omniscient could allow evil or injustice to get by without him stopping it.

Well in the Book of Habakkuk, the prophet complains to God twice and God answers him both times.  God’s answers range from indifference to actually what he was doing and going to do for Judah. And Habakkuk’s response to God’s answers is something we as Christians should apply in our lives and give non-believers at least an intellectual understanding of who God is even if you don’t agree with it.

There are only three chapters in Habakkuk and can be read in within twenty minutes. However for the next three Saturdays, I will post in this order:

I believe if you read the Book of Habakkuk in this structure you will get the full context and meaning of this obscure book and its importance for us today.

Finally, I believe this song by Chris Tomlin is an appropriate theme for this study.

See you next week!

5 Responses to Habakkuk: An Introduction