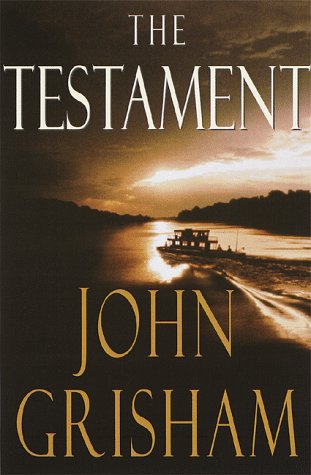 Back in the late 90’s, I worked for Borders Books in Albuquerque,
NM for almost three years. This was the time in my life where the reading bug hit me tremendously.
During that time, John Grisham was at the height of his popularity at
the top guy in the Popular Fiction market. With books like The Firm, Pelican
Brief, and A Time to Kill were all big sellers in our store. I had decided I
wasn’t going to read him.
I had a caught the Retail Bookseller’s Attitude towards anything that
was accepted by the mainstream. I wanted to fit with my co-workers and I thought I needed to be snobbish to be accepted.


Moreover, I was a hypocrite because at that time I’d read a Dean Koontz
novel every week. Plus I was reading a lot of Science-Fiction and Fantasy as
well. Go figure.
Now fast forward to 2009, I had found out that John Grisham became
a Christian and this novel, The Testament, was the first book he wrote after
converting to Christianity. I was intrigued to say the least.


Well, I’m glad I read my first Grisham novel. He knows how to tell a story. I’ve never had much interest in the legal profession but I was in The Testament and I found the profession somewhat interesting.

Okay, what is The Testament about?

The Testament begins with Troy Phelan, a billionaire, who wrote his last
will just before he kills himself by jumping out of his own company headquarters building.

Well, Mr. Phelan lived a colorful, eccentric life. There were three
ex-wives and six children all wanting to get their hands on his eleven
billion-dollar fortune.

But, Mr. Phelan had planned everything well with his lawyer, Josh
Stafford. Mr. Stafford read his will to the family and their lawyers and Mr.
Phelan decided to give his entire fortune to another daughter no one knew about named Rachel Lane.

Rachel Lane was a missionary living in the Pantanal Jungle in NW Brazil
amongst the indigenous people for years. Josh Stafford sends Nate O’Riley, one of his lawyers, down to Brazil to find Rachel and her sign the will and claim her inheritance. Sounds simple so far!

Not so fast!!
Well, Nate O’Riley just got out of rehab for alcohol and drug abuse. He
has gone through two marriages, lost contact with his children, and was on his last rope as a lawyer.

Nate arrives in the Pantanal and finds Rachel Lane after a harrowing
adventure. Rachel doesn’t want the inheritance and refuses to sign the will.  He leaves the will and returns to Washington D.C. convinces that Rachel is a different kind of woman because she won’t accept the inheritance.

The story takes some shocking twists and turns on how they will settle
Mr. Phelan’s estate. I must write I really like Grisham’s characters and I felt
a sense a realness from each of them. Even the minor characters. Also, this is a story of redemption and how faith can change lives.
Moreover, how money can ruin people as well. Lastly, that Mr. Phelan how lived a God-less life could see something in his daughter who gave up everything believe and follow Jesus.

This is a novel that should be read and I tip my cap to John Grisham!

4 Responses to Book Review 4: The Testament by John Grisham