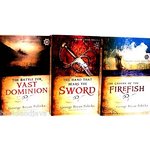 Book 2: The Hand That Bears the Sword

Book 3: The Battle for Vast Dominion

It’s been awhile since I’ve read a trilogy. I’ve read mostly standalone novels lately but the striking covers of Trophy Chase Trilogy by George Bryan Polivka compelled me to read it.

First of all, I must write this series deserves to read by all who enjoy good storytelling regardless of the genre. With that said, I believe that the Trophy Chase Trilogy will be a modern classic of Christian Fantasy.

Now, with that incredibly high praise, let me write what the trilogy is about.

The opening book of the trilogy introduces Packer Throme, a failed seminary student, who returns back home to his fishing village in the Kingdom of Nearing Vast. Packer is also an accomplished swordsman.

His life goes from bad to worse and decides he wants to go hunting for the legendary, mythical Firefish. The Firefish are mysterious sea creatures that have been hunted for years by people of Nearing Vast.

As a matter of fact, Packer Throme learned the secrets of the Firefish from his dad who left years ago hunting for those sea creatures.

Packer becomes a stowaway on the grandest ship in Nearing Vast. The ship called the Trophy Chase and is captained by Scat Wilkins. Scat is brutal, efficient, and a natural leader.

This becomes the adventure for the opening book of the trilogy. Polivka does an excellent job in developing the characters, having an interesting plot, and intertwines Christianity nicely within the story.

Book 2: The Hand That Bears The Sword

The middle book of the trilogy continues the adventure of Packer Throme. However, there is another kingdom named the Drammun who want to destroy the Kingdom of Nearing Vast and kill Packer Throme.

The Kingdom of Drammun is a theistic kingdom who believes that they are the worthy ones meant to rule everybody who is not Drammun and feel the people of Nearing Vast are heretics because of their belief in a Christian God.

Packer is sent back on the ship, the Trophy Chase, by the King of Nearing Vast to defend the kingdom. However, he has decided to become a pacifist and refuses to take up his sword. Packer believes its God’s will to protect him and his people.

I must admit there were several times in this book, I wanted Packer to fight and defend himself. But, I liked that the author showed that the dimension to his character and made me care about him overcoming his perceived character flaw.

The middle book of the trilogy sets up nicely for the final book and eventual showdown between the People of Nearing Vast and the Drammun.  Also, the role of the mythical Firefish in this battle.

Book 3: The Battle of Vast Dominion

The last book in the trilogy has Packer as the new king of Nearing Vast. (I know some of you can put it together from this review how he would become king.  But, please read it! LOL!!)

The Drammun wants the secrets of the Firefish from Packer Throme and decided to have a truce with Nearing Vast in order to get it.

Packer decides to go the Drammun homeland on a Paul-like missionary trip to convert their people into followers of Christ. Well the adventure continues and there’s an interesting surprise by the Firefish that ties the entire trilogy together.

In summary, I believe this trilogy is closer to Treasure Island or Lord of the Flies with a strong Christian theme instead of Chronicles of Narnia or Lord of the Rings. Moreover, George Bryan Polivka has carved his own unique place in Christian Fantasy with this wonderful trilogy.

A must read and highly recommended.