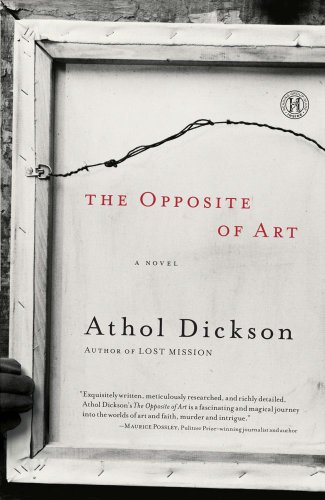 Athol Dickson is becoming one of my favorite novelists.

Last year, I did a review for his Lost Mission novel and I throughly enjoyed it. Now, I’m doing a review for his latest novel, The Opposite of Art. Also, he is the first novelist I’ve done a second review for on my blog.

The Opposite of Art is the story of the genius artist, Sheridan Ridler, who is known for painting nudes without faces. Ridler got quite a reputation in the art world as a cad to the ladies and an arrogant jerk to everyone else that came in contact with him.

Well, he has an accident at the Harlem River and that begins his spiritual transformation. However, the art world thinks the great artist is dead and Ridler’s paintings are worth millions. But there are reports that he’s alive and his daughter (whom he never met) from one of his models decides to search for him.

Because of her search, the daughter attracts another individual from Ridler’s past who wants to make sure the great artist is dead….and if not, stay dead.

In lesser hands, a story like this could have fallen victim to stererotypes and the spiritual transformation would have been a “Come to Jesus Moment and Now I Have A Get Out of Hell Free Card.” However, Dickson creates a story of intrigue, love, murder, family relationships, and the collision of art and faith. He goes beyond the stereotypes to produce a novel that has depth and reveals the honest struggles of someone trying to come to terms with their spiritual conversion.

Because of that, Dickson has become one of my favorite novelists.  He seems to understand that being a believer is not just about saying the sinner’s prayer, attending at church once a week, and singing Jesus loves and forgives me songs. A spiritual conversion affects every area of our lives and this type of fiction should reflect that and not simplify it for mass consumption.

In both novels I’ve reviewed, Dickson has given the Christian Fiction genre a fresh and honest perspective of what these types of novels should look like and he deserves to be mentioned with writers that preceded him like Walker Percy, Flannery O’Connor, and Graham Greene who expanded the genre’s boundaries as well.

The Opposite of Art should be a must read for all serious readers and is one of the best novels I’ve read in 2012 so far.

7 Responses to Book Review 26: Athol Dickson’s The Opposite of Art